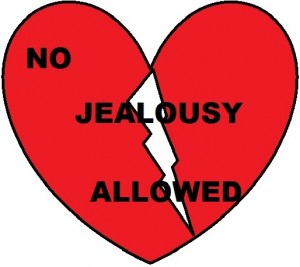 Terry and Pete, a married couple and in the lifestyle for 4 years, came into contact one night with the green-eyed monster (jealousy).  Out at an intimate party one night with a few other lifestyle couples, Terry told Pete that he seemed to be having more fun with Jane than with her all evening and that made her feel uncomfortable.  She told him she actually felt jealous.

Pete who is a great listener had asked what it was in particular that made her feel this way.  Terry told him that although she didn’t mind him dancing with Jane, she wanted him to save some dances for her.  Basically, this was her way of telling him that at some point during the evening, she wanted them to bond.  John realizing that Terry is the most important person in his life and what she thinks really does matter made a pact to make time, even at a swing club, for each other.

Whether it’s a dance, or hanging out right after playing with another couple, no one is more important than the person you came to the club with.  After all, this is the spouse that has elected to go to a swing clubs with you and make your life more exciting along the way.