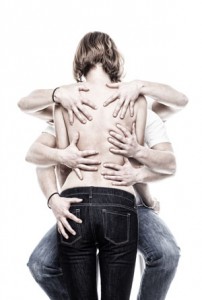 There is a reality TV show called Secret Sex Lives: Swingers that was  filmed in Atlanta – the heart of America’s so-called Bible belt – the show takes us into the lives of five swinger couples who swap partners as a recreational activity.

The show and the concept of swinging are no doubt controversial, but in a way, it’s a platform for the swinger community to clear up any misconceptions people may have about the lifestyle.

So what did we learn about swingers ?

– Swinger couples clearly understand the difference between love and sex.

When it comes to commitment, these couples are honest with each other. They understand that swinging is just a recreation that needs both of their consent before any actual swapping takes place. Meaning there is no cheating involved. Cheating only happens when one of the parties secretly hook up with another.

– There is a community of swingers out there.

Swinger couples hook up with other people who adopt the same lifestyle. In other words, they meet only like-minded people. They meet up at a swingers’ club, at a planned party for swingers, or even online at swinger sites created especially for the community.

This proves that although swingers are involved in a non-monogamous relationship, they are not as promiscuous as we think. In fact, they have to go on dates with another couple before they finally agree to any swapping activity.

In 2000, Bergstrand Curtis and Blevins Williams released a study called Today’s Alternative Marriage Styles: The Case of Swingers. In this study, researchers conducted a nationwide survey in which more than 1000 swingers participated. The results showed that in general, swingers have higher levels of happiness compared to the average married couple.

– Just because a couple has a pineapple placed upside down in their shopping cart doesn’t meant they’re swingers.

There are different ways to spot a swinger couple, but an upside-down fruit is not one of them. If a couple is flirting with you and your wife / husband in the open, there’s a chance that you’re dealing with swingers. If you’re new in town and want to mingle with others, you might not want to approach a couple and ask them where the local swingers’ club is located. Instead, visit a swinger’s website to meet local swingers in your area.

WHY SWINGERS HAVE A LOWER DIVORCE RATE THAN MONOGAMOUS COUPLES

Recent statistics have shown that swingers tend to have a lower divorce rate than monogamous couples. Swingers are people in open relationships, where partners are committed to each other, but engages sexually with other people at the same time. Swingers are more open and honest with the people they are in a relationship with than monogamous couples who often indulge in infidelity. Most swingers think that swinging is a good practice that helps to strengthen their relationship with their partners. Why do swingers refrain from divorce? There are many reasons READ MORE

ROLE PLAYING WITH A SWINGING COUPLE

Being a swinging couple, you have almost certainly had one of your sexual fantasies as dressing up while taking up a different persona. This is because for some couples, role playing is a great way to utilize their imagination to enhance their sexual experiences. Role playing serves as one of the best methods to step up your sexual experience a notch higher, because it introduces variety to your sex life. Whether it is with those sexy short school girl uniforms or those tight nurse uniforms, role playing adds fun and excitement READ MORE

PRESSURING YOUR PARTNER INTO A SWINGING LIFESTYLE

For sure, you love a swinging lifestyle because you find lots of fun in it, and you are longing to wear those sexy clothes and get to mingle with others in the local swingers club accompanied by a couple. You have been yearning to have your partner right beside you during such moments but each time they seem not interested because they feel that such a lifestyle does not belong to them, but finally they gave in and gave it a try and you really feel that it was fantastic READ MORE